Posted by Marc Schenker on Mar 27, 2014 in B2B Web Design and Persuasion and Conversion Optimization and User Experience

Sometimes, the things that seem the simplest are really the most effective. That doesn’t just go for conversion-rich websites, but also for many things in life. While some argue that a multitude of choice is actually a good thing, it’s actually just the opposite when it comes to conversion rates, and B2B sites aren't the exception. Too much choice simply overwhelms, and that’s bad news for your site’s conversions.

You see, the more choice that you present your buyers on your site, the more they’re likelier to stall in their decision-making. They may even refuse to click outright, just because they’re having a hard time making a decision. Simply put, choices add distractions to the user experience, yet when you’re designing a B2B site user flow, you ideally want to keep your user on task so that he finishes his task.

If there are too many competing elements on your site, the user is going to fail to keep focus since he’ll be tempted by too many places to click. Successful sites already know this, which is exactly why your average landing page has no navigation menu. So what’s the solution to the overwhelming distraction of choice? Reduce choice, of course.

Psychologists have known for a long, long time that the whole concept of choice is actually very burdensome and even oppressive to most people. Sure, we always hear that more choice is good because it presents us with more options and the like, but that equals excessive freedom. And the human brain actually doesn’t like much freedom at all, believe it or not.

One of the earliest psychologists who actually homed in on this unsettling principle of choice and freedom was Erich Fromm, the renowned German social psychologist. His seminal book called Escape From Freedom, first published in 1941, made the point that human beings are, by nature, allergic to freedom. 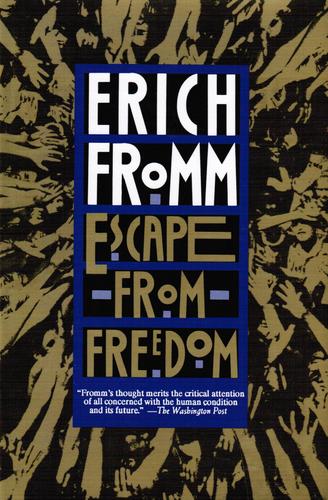 Instead of living their lives independently, confidently and using their freedom successfully, people are hardwired to either move to conformity (bringing their beliefs in line with society to escape the freedom of personal choice) or authoritarianism (where choice is completely removed and instead dictated by an authority).

How does this tie into B2B, you ask? Simple. It reinforces the fact that the freedom to have many choices instead of fewer choices simply scares people (customers) and even repulses them.

Other psychologists have taken this freedom-aversion topic and expanded on it in a way more directly related to business and marketing.

In the book, Schwartz, an American psychologist who publishes op-eds in the New York Times, makes the case that too many consumer choices actually cause anxiety in shoppers. Therefore, eliminating this excess of choices is actually good for the wellbeing of psychological health.

To understand more of Schwartz’s analysis on the concept of choice, watch and listen to his TED Talk on the subject.

Research Supports the Fact That People Hate Too Many Choices

When solid, scientific research is telling you that more choices lead to fewer sales, then it’s definitely high time to stop whatever you’re doing and heed the results of such a study. In fact, there is such a study that’s been around for a while and has reached the heights of notoriety in marketing and psychology circles.

It’s called “When Choice Is Demotivating: Can One Desire Too Much of a Good Thing?” Conducted by Sheena S. Iyengar from Columbia University and Mark R. Lepper from Stanford University, the study turns on its head the old misbelief that more choices are better. It shows that more choices result in fewer sales.

Here’s what went down:

But how can this be? Didn’t we just say that more choices lead to fewer sales? That’s right! When we look at the results a bit deeper, we can confirm that that’s exactly what ended up happening. 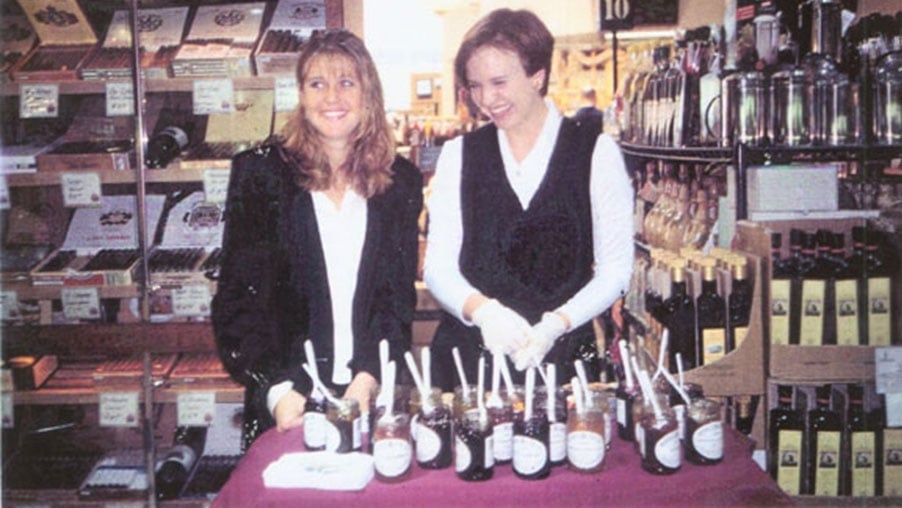 We can explain these stunning results by delving a bit into social psychology. Simply put, the people who were exposed to 24 different flavors were subjected to something called choice overload.

When human beings are exposed to excessive choices, they simply shut down, feel overwhelmed and don’t respond by buying a lot. Even though more customers are initially drawn to a greater number of choices, that’s ultimately meaningless since they’ll eventually buy less because excessive choices make decision-making challenging.

To absorb more of Iyengar’s analysis on the concept of choice, just watch and listen to her TED Talks on the subject.

Tying This All Together to B2B Websites

By now, it should be more than apparent that excessive choices on your B2B site can hamper and even sabotage your conversions and sales.

The number one priority in B2B web design is making sure that the user flow is such that the user is kept on task, so that he eventually completes the task. This task is obviously to increase your website conversion rate, whether that’s just leaving his personal information as part of a lead capture or already buying the product or service.

The fact of the matter is that choices on a B2B site add distractions to the user flow. When there are more distractions in the user flow, the user is obviously less likely to stay on his task to convert. If your B2B site is riddled with too many competing elements, then your user is likelier to leave your site or page altogether because he has too many choices of where he can click on.

Now that you know that it’s an industry best practice to reduce choice on your B2B site, there is still the matter of effectively implementing it on your site. What does reducing choice look like on a B2B site? Does that mean you have no navigation bar or just fewer links? Or does it mean less calls to action?

Tips for Reducing Choice on Your B2B Site

Your B2B site should keep choices to a minimum, so that your conversion rates increase. Here are some actionable and proven ways of doing just that:

Navigation Menu – While this might seem too obvious to mention here, you’d be surprised at how many B2B companies fail to eliminate the navigation menu on crucial pages on their sites. It’s especially important to remove your navigation menu on your landing page. Just think of it like this: Your buyers are less likely to complete the landing page’s call to action if it’s easy for them to leave said page with an array of links.

Let’s say that you keep your navigation menu on your landing page. Let’s also say that one of the links on the navigation menu leads to your FAQ. What that’s going to create in the mind of your buyer is doubt about whether or not to go through with the call to action. After all, when he sees the FAQ link, he’ll question if he should do more research before converting or if he missed something entirely. 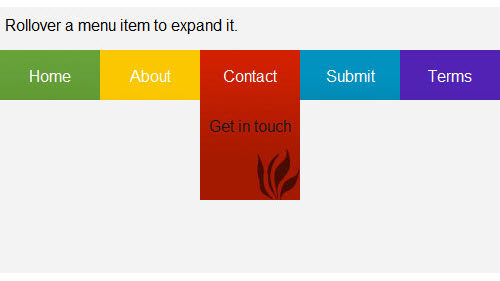 You have one recourse if you don’t want to take away all of the links on your landing page: Simply leave one link on the landing page, but have it go back to your homepage instead (not a page like the FAQ that can raise more doubts than anything else).  If there are questiins to be answered, you should answer them directly in the page istead of sending the user elsewhere.

Just One Call to Action – It’s advisable to only have one call to action on a page. Since you now understand that consumers hate too much choice…simply don’t let them choose. If you give them more than just a sole call to action on a page, the risk is great that they’ll just pick one and not the other choices (greatly reducing them completing the call to action).  Although this seems counterintuitive when you are trying to have offers for different personas, you can still achieve this using a smart content software to deliver the call to action that is most relevant to the buyer looking at your site.

We can talk all we want about the solid psychological research behind reducing choice in B2B sites, but what matters just as much is seeing examples of this in highly effective websites.

One stellar example that comes to mind is the website of Zendesk. Zendesk is a software development company that improves the relationships between businesses and their customers.

If you look at the homepage of the company, there are very few choices that a customer can make, thereby drastically cutting down on wasted sales. While Zendesk has a sticky navigation menu that’s always visible when you scroll down, the user is never left wondering what to do next since the next step is always clearly outlined. 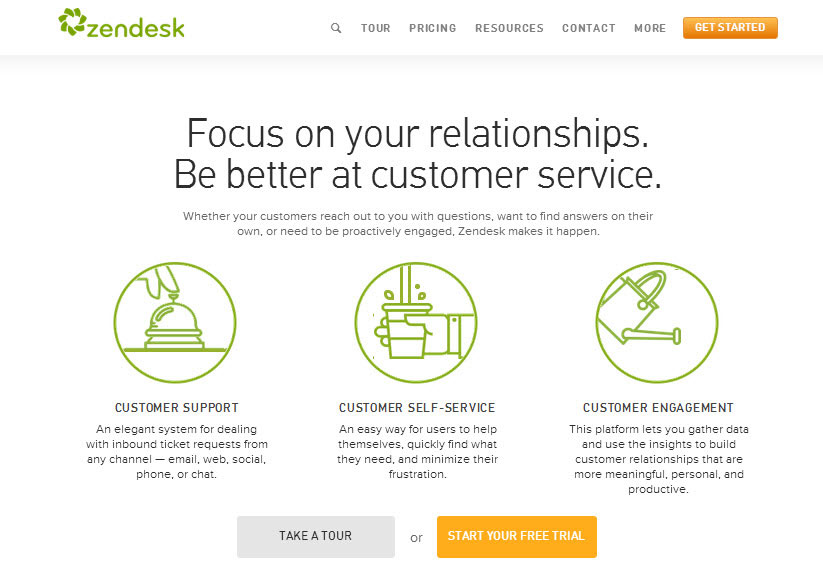 Below the fold, you see the company’s strong value proposition (“be better at customer service”), a series of features that clarify the value proposition, and then, right away, call to action buttons. With such a user flow, you don’t have much choice except to follow through on either taking a tour or starting the free trial.

Another awesome example is the website of Square, the mobile-payments company. Note how the value proposition is emphasized right away in the header (with the copy and picture), and the call to action is right in the thick of it, where it can’t be missed. As far as the user flow goes, that’s pretty much making 100% sure that the user has no other choice but to click on “get started.” 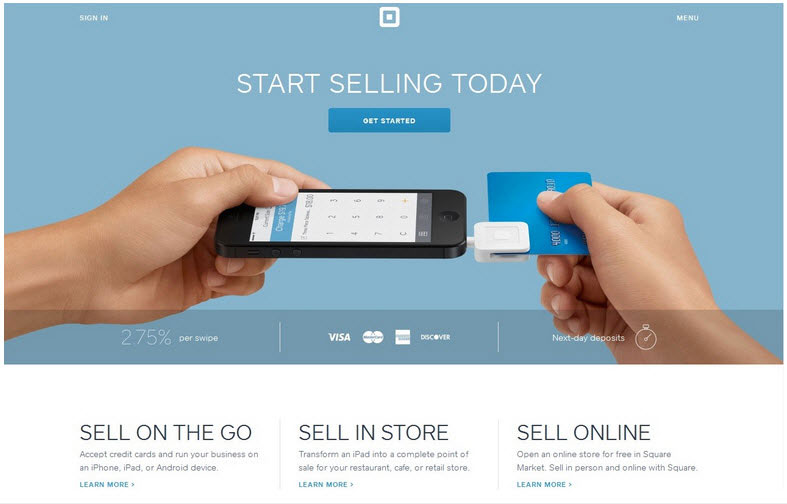 Sure, if you look right below the header, you’ll see three links to learn more about “sell on the go,” “sell in store” and “sell online.” However, although it could be argued that those links distract from the above call to action, they each actually go to a unique page that only has one call of action for each distinct service (above the fold), so this functions as a directory page.

You want more conversions from your B2B website? Then reduce choice as much as possible. It’s really that simple and straightforward. While it can be tempting to offer your customers more choice, the research has actually solidly disproven doing so. Instead of doing something that your customers like, providing more choices simply hampers their decision-making, thereby leading to fewer conversions for you.

What’s recommended is for you to reduce choices on your B2B site so that your buyers stay on task. The task is to get them to convert many, many, many times during their research process and eventually clicking your ultimate call to action (consultation, assessment, demo, or contact forms). Hence, fewer choices along the way will make the user flow simper, making it likelier that your buyer will click on the call to action button you want.

Don’t make it easy for your buyers to leave the page. Make it easy as pie for them to convert, do your homework, figure out what the conversion path should be and present only the relevant 1 or 2 choices at a time.